I have made a simple Node.js application that connects to Redis database and lets you to set and see the value of a key. We use the official image for Redis. The app has three endpoints:

You can check out the code for this in the GitHub repo. It is also built into a Docker image under hanzel/tutum-nodejs-redis.

To run this application, you need to set the following environment variables:

We are going to use HAProxy to do the load balancing. Tutum provides it’s own docker image for HAProxy. If we deploy this image in Tutum and the link a service, it will configure itself based on the target number of containers of that linked service.

Create an account with Tutum. Then connect it to your favourite cloud provider. Nodes are server instances or hosts, where we will be hosting the containers.

Goto Nodes tab and click on the Launch your first node button. Give a name for the cluster. You can use Deploy tags to specify where you want the services to be hosted. For this article, it’s not needed. Now select your provider, region and instance type, as needed. I am selecting 1GB instance from Digital Ocean. 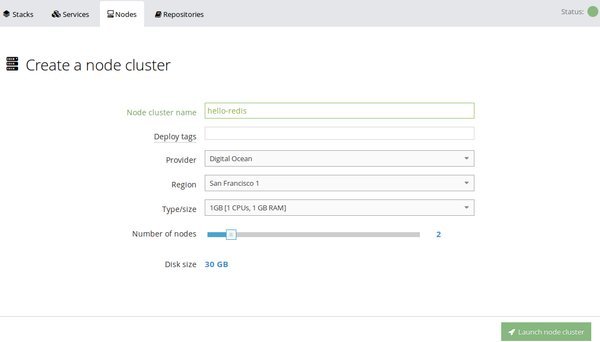 Now select the number of nodes you want in your cluster. I want two nodes in the cluster. You can change any time as needed. Now click the button Launch node cluster button to deploy the cluster. This could take a few minutes. Once it’s ready, we can see the status Deployed for each node.

Each docker image running are called services here. We can add each services and configure it from the Tutum web UI with the Services tab. However, this is not the best way to do this.

Tutum supports configuration files called Stackfiles and those files are named tutum.yml. This is very similar to docker-compose.yml with additional parameters for the deployment configuration. We can specify, configure and link services with this file.

We will start with the redis service. The configuration required for this is given below:

The image used in redis. The next two parameters are for deployment purpose. The target_num_containers parameters is for scaling and it show how many instance of this containers that we need. We need only one instance of Redis. There are many deployment strategies available. The high_availability value ensures that the containers are deployment in such a way that it’s is always available. You can read more about these parameters in Stackfile docs. We use the command redis-server --appendonly yes for persistance with Redis. We need to expose the port 6379 of Redis container to link it to other services. The final parameter volumes, save the data in /data folder for persistance.

The configuration for Node.js application is given below:

The images used here is hanzel/tutum-nodejs-redis. We are using the load balancing of this service. So we will have four instances of this container. Since we have used the high_availability deployment strategy, each of our two nodes will have two containers of this image each.

Now, we need to set the environment variables. This application will run on the port defined in APP_PORT variable, 4000 in this case. The IP for redis instance is redis and the port is 6379. We now expose the port 4000 of this application.

The final service that we use is for load balancing and the configuration for this is given below:

The image used here is tutum/haproxy:latest and we are linking the node service. With the ports parameter, we can set the ports that are publicly accessible. We are mapping the port 80 of the host device with port 80 of this container. We set the restart parameter to always so that this service will restarted everytime it stops. We also need to set the roles parameter to global. This allow this service to communicate with Tutum APIs and reconfigure based on your cluster.

So the entire Stackfile will be this.

To deploy this stack, goto the Stacks tab in Tutum and click the Create stack button. Now give a name for this stack and paste the Stackfile. Now, click Create and deploy. This will deploy all the services. This can also take a few minutes.

Once the stack is running, goto Endpoints tab in the stack. This will have all publicly accessible ports of any service. We have only one, the port 80 in load balancer service. A tutum.io subdomain will be created for this. Open this link to access your stack.

In this article, we deployed a load balanced Node.js application and Redis database with Docker containers with Tutum. We have seen that, Tutum provides us with easy access to powerful features like load balancing and scaling when using Docker hosting.

Docker Hosting with sloppy.io
Auto Scaling with Docker
Load Balancing with Docker Swarm
Local Cryptocurrency Wallet that doesn't store anything
Build and Deploy to OpenShift with TravisCI and Wercker